Jupiter and Saturn Conjunction takes place every 20 years and brings a massive change in the world . The 9/11 episode  took place after few months  after the Conjunction of Jupiter and Saturn in the sign Taurus till 18th June 2001 . Needless to mention that there was a Terrorist attack On the World Trade Centre . Jupiter and Saturn will be conjunct in the Trinal house Capricorn from the Taurus sign where Saturn and Jupiter were conjunct in 2001.  This would happen form the  the 3rd time in the Sign Capricorn from the 14th Sept to 20th Nov. 2021 . The Unfortunate part is the Conjunction  of Jupiter and Saturn is taking place when there is  Lunation of 13 days from the 7th Sept. 2021 and US dead line to withdraw all the troops from Afghanistan is again 11th Sept. 2021 . There may be unfortunate happenings in the Afghanistan  in the immediate present also . This may prove to be a Bolt from the Blue for Afghanistan and the complete world .Taliban Terrorist Groups will gain ground on Earth. My Predictions seems to be coming True. Read My Article and the text  where I have crystal clear pointed out a Massacre in the Gulf Countries and specially Afghanistan and situations parallel to Mahabharat which also took place after a lunation of 13 days  when Sun was in a Fiery sign Sagittarius. Now at the time of 13 days Lunation Sun will be in the sign Leo again a Fiery sign . The 2 Tithis which will suffer Kshaya are the Pratipada Lord of which is Agni and Triyodasha Lord of which is Kaam Devta Lord of Sex Hence War and Crime against women
Read My Article what I have Predicted in my article “Sept. 2021 Most Venomous Lunation 13 Days Identical Mahabharat Lunation Solar Ingress Virgo Jupiter Affliction Will Add Fuel To Fire” link https://wp.me/p7kBZR-5Ka

Read this HAVOC ON EARTH AND FIGHT BETWEEN COUNTRIES TERROR GROUPS WILL GAIN MOMENTUM. SATURN HAS COMPLETED 30 YEARS FROM THE GULF WAR AND HENCE PROBABLITY OF MASACARE IN THE GULF COUNTRIES AFGANISTAN WILL BE MOST PRONE TO TERRORISM AND TALIBAN GAINING GROUND THERE
US DEAD LINE TO WITHDRAW THE TROOPS BY 11TH SEPT. 2021 AFTER 20 YEARS FROM THE 11TH SEPT 2001. ALL THIS IS REFLECTING MOST VENOMOUS TIME EVEN FOR INDIA BY THE TERROR GROUPS TALIBANS
HENCE THE LUNATION CHART OF THE 7TH SEPT. 2021 IS MOST ENIGMATIC AND PARALLEL MAHABHARAT WAR
Chart of ASHRAF GHANI born on the 19th May 1949 and has Jupiter debilitated and as per Declination Jupiter will be over the Natal Jupiter and Natal Moon after the 14th Sept. to 20th Nov. 2021 will be most venomous for the President . There will be total chaos in the Country wait and see. S
https://www.astro.com/astro-databank/Nation:_Afghanistan

Haunted by Memories of Repression, Afghan Women Fear for Safety and Rights as Taliban Gain Ground

Let us have a Look at the Planetary positions first of the Afghanistan  of the 22nd Dec. 2001 Kabul

As per Varahamihra the Capricorn Sign is allotted to  North India, Punjab, Albania, Bosnia, Bulgaria, Greece, Mexico, Part of Iran, Afghanistan, Bangladesh. Hence Afghanistan becomes most prone to the Lunation of the 13 days , Jupiter and Saturn conjunction in Capricorn between the 14th Sept to 20th Nov. 2021 and more so till the 9th Jan 2022

The Country is under the operation of  Saturn-Jupiter  Dasha  and In Transit Both will be in the 10th house  of the Foundation chart in Transit . Jupiter is Retrograde and with Rahu in the 3rd house of boarder issues . Saturn is Placed in the sign Taurus in the Star of Rohini and the Transit Rahu is over the natal Saturn in the same star considered to be explosive even in the immediate present  and before the 7th Sept. 2021 . Both the Dasha Lords will be afflicted in the Transit  as per the below analysis.  Natal Saturn is having aspect of the natal Mars and Natal Mars has aspect of the Natal Saturn a return aspect connection. The Trishamsha Lord of the 6th Lord Mercury  and the 8th Lord Mars is  Jupiter  and Anter DASHA OF Jupiter is in operation. the 22DK sign is Scorpio and Mars is also Kharesh and  Transit of Ketu in the 22DK sign till the 17th March 2021 could prove explosive from the Terrorist Groups

10th house asper the Mundane Astrology is the house of the Head of the Country, Prime minister, President. If Afflicted in Transit  then Disgrace and  and even the death of the Ruler. Hence fear to the life of the Acting President —— Note these Predictions.  Time of Crisis will be  Between Sept to Dec. 2021 and specially when Mars aspects the 10th house from the 7th house of Wars in Transit after the 21st Oct 2021. In this Position Mars will also influence the Transit Saturn and the Natal Saturn

I have already discussed the Lunation chart of the 7th Sept. 2021 and is most enigmatic for Afghanistan  even 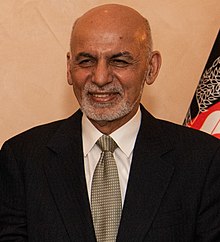 The President is Born on the 19th May 1949 and Has Jupiter Debilitated  and has Venus in Taurus , both the Planets will be over the Natal Planets as per Declination since he has completed 72 Years of Age  . The Time FRAME FRON THE 14TH SEPT TO 9TH JAN 2022 WILL BE MOST PRONE TO UNTOWARD HAPPENINGS IN THE COUNTRY AND THE PRESIDENT MAY ALSO FACE HUMILIATIONS AND A ILL REPUTATION DURING THIS TIME .  VENUS TRANSIT OVER THE NATAL JUPITER AND MOON AND THEN FALLING BACK IN THE SIGN SAGITTARIUS WILL FURTHER ADD FUEL TO THE FIRE FROM THE 30TH DEC. TO 27TH FEB 2022

Venus will also be Fallen from the in the sign Sagittarius from the 30th Dec. to 27th Feb. 2022  and will be explosive for both the President and the Country . Venus is the 7th Lord  and Deeply afflicted in Sagittarius in the Foundation chart of the Country

Presidential elections were held in Afghanistan on 28 September 2019. According to preliminary results, which runner-up Abdullah Abdullahappealed against, incumbent Ashraf Ghani was re-elected with 50.64% of the vote. After delays over disputed votes, Ghani was declared the winner in the final results on 18 February 2020. Abdullah Abdullah rejected the results and moved to set up his own parallel government and separate inauguration. However, Ghani was officially sworn in for a second term on 9 March 2020.The ensuing political crisis was not resolved until 16 May 2020, when Ghani and Abdullah signed a power-sharing deal in which Ghani would remain president and Abdullah would lead the peace talks with the Taliban when they start

The Chart above clearly shows that in the Natal chart there is Neecha Bhag Rajyoga of the Jupiter , but when there is Transit of Jupiter and Saturn in Capricorn there is time for Trouble  also the President has completed 72 years of age and hence Jupiter  Sun  Rahu and Venus will be over the natal Jupiter, Sun and Venus as per Declinations and in Transit  Also Jupiter will be in most afflicted condition since Retrograde, Debilitated and also Fallen. These Parameters may put the President in most difficult situations specially when in the Foundation chart the Dasha of Saturn and Jupiter is in operation and both are afflicted in the chart being the 9th and the 10th Lord . The Taliban’s may become more aggressive and there may be war like situations in the Country and also in the World. India may have negative impact of the withdrawal of the US troops from Afghanistan The Transit of the Rahu and Ketu in the 1/7 axis of the Natal Sun, Venus and Mercury may not prove fruitful till the 17th May 2022 and after this Date the Rahu and Ketu will falll over the natal axis of the Rahu and Ketu of the Foundation chart of Afghanistan. Hence from the above it is crystal clear that the Lunation of the 13 days from the 7th Sept. may prove to be explosive for the Gulf Countries and specially Afghanistan. Using the Rashi and Nakshatra Sanghatta chakra the Planetary positions will take the world for a rough ride in 2021 in a nut shell

Have a look at the Rashi and Nakshatra Sanghatta chakra below

CHAKRAS  MOST MALEFIC RESULTS ARE SEEN SPECIALLY IN SEPT AND NOV. 2021 FOR THE WORLD EVENTS  THE WHOLE WORLD MAY BE IN ANGUISH AND PAIN

The Time from the 7th Sept. 2021 is most explosive for the world from this time specially for 195 days for War like situations in the world and specially in the gulf Countries and Afghanistan  Havoc from FIRE AND SIGNIFICATIONS OF MARS AND CRIME AGAINST WOMENAND SITUATIONS SOME WHAT LIKE THE MAHABHARAT TIME.INDIA IS ALSO PRONE TO TERRORISM AROUND THE INDEPENDENCE DAY AND IN THE 13 DAYS OF LUNATION IN JAMMU&  KASHMIR  . BOARDER CLASHES WITH NEIGHBOURS CANNOT BE RULED OUT

THE PRESIDENT OF AFGHANISTAN MAY FACE THE WORST TIME IN LIFE AND THREAT FROM THE TALIBANS .IT IS ALSO POSSIBLE THAT HE MAY GO UNDER GROUND  IN THE IMMEDIATE PRESENT —— NOTE THIS PREDICTIONS

INDIA IS NO WAY BETTER WHEN WE TALK OF THE TALIBANS

‘Not Good for Them, Have Seen Fate of Others’: Taliban Warns India Against Military Presence in Afghanistan

Solar Ingress In Leo & Lunation Chart of 7th Sept. 2021 Seems Most Venomous For The World